It’s been a really long time since my last post and even longer since the last post on a sewing project. This is what happened: Early last spring I finally started feeling fully energized again and motivated to finally move forward with some of my research. So for several months I focused on work. The little spare time I had, I spent mostly on gardening and sewing. After spending much of the workday in front of a computer, I wasn’t too motivated to write up any of my projects as blog posts. But I have a lot of sewing projects finished or in progress that I’m excited to share, so it’s time to finally break the silence!

In this post I’ll cover the second part of sewing the little forest backpack, that I started last January and finished mid February (wow, time flies!). We had left off with all the pieces cut out, waiting with the assembly until some of the hardware would arrive. Since it’s been such a long time my memories on how I assembled this little baby are starting to fade… But I’ll do my best to cover at least some of the steps. It’s actually not very complicated!

The first step was to sew a little inside pocked (handy for keys and phone) to the back panel of the inner bag. Then I assembled the inner bag of the backpack (see below) by sewing the side and back panels into a tube and attaching them to the bottom (semi-circle).

Next I “lined” the flap (slightly pointy semi-circle) that would later become the closure and the outside front pocket with the mustard wax cloth. In this step I also attached the strap for the closure to the flap (lower left picture).

To increase the durability and stiffness of the outer fabric bag, I added some medium thick fusible interfacing.

With neither of the two fabrics used for this backpack I was comfortable using pins, as I didn’t want to destroy the surface. You can see the two methods I used to fixate the layers without pins in the pictures below:

When attaching the bottom panel to the outside bag I inserted several straps: Firstly, two straps with metal rings on the back that could later be used to attach the backpack straps (upper right picture). Secondly, in the center of the front panel, I attached a strap that would form the backpack closure together with the strap that was attached to the flap earlier (middle and lower right pictures). I really liked the idea that the closure strap would help to secure the outer front pocket! If all of this doesn’t make any sense, maybe scrawl down and take a look at the pictures of the finished backpack?

Bringing it all together

Usually I would sew the outer and inner bag together along the top edge of the bag in a way that hides all seams. However, here I chose a different path that allowed me to attach the inner and outer bag along a few more seams. I did this hoping to make the backpack more durable. It’s holding up great a year later, so maybe it was worth it?Additionally, this method gave me a bit more control over where I was attaching the shoulder straps and the handle to the top edge of the backpack. The downside was that I ended up with a “messy” top edge, but I fixed that in the next step. 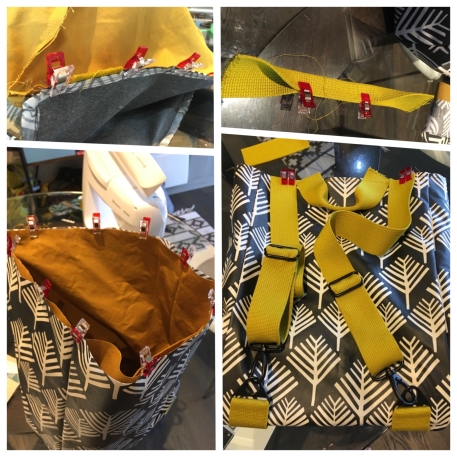 To close the backpack, I opted for a drawstring under the flap. I made a small tunnel for the drawstring using a thin strip of the outer and inner fabric and inserted two button holes on one side. I then attached the tunnel in a similar way to how you might attach binding to a quilt: sew on one side first, iron the free edge, flip it over and sew again along the same seam. Painters tape and lot’s of clips helped to keep things in place. 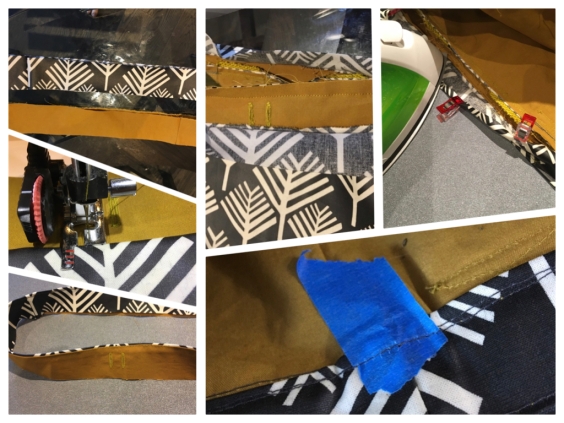 Here we go: my fresh new backpack! It’s funny looking at these photos over a year later. I’ve been using this bag a lot over the last year and it’s still holding up great! The size was pretty much perfect and it’s surprisingly comfortable to wear considering. that there is no padding or anything. The main thing that can impede comfort is stuffing too much in that little inside pocket, I found. Lot’s of people asked me where I bought it, giving me the opportunity to proudly announce that I made it myself 😉 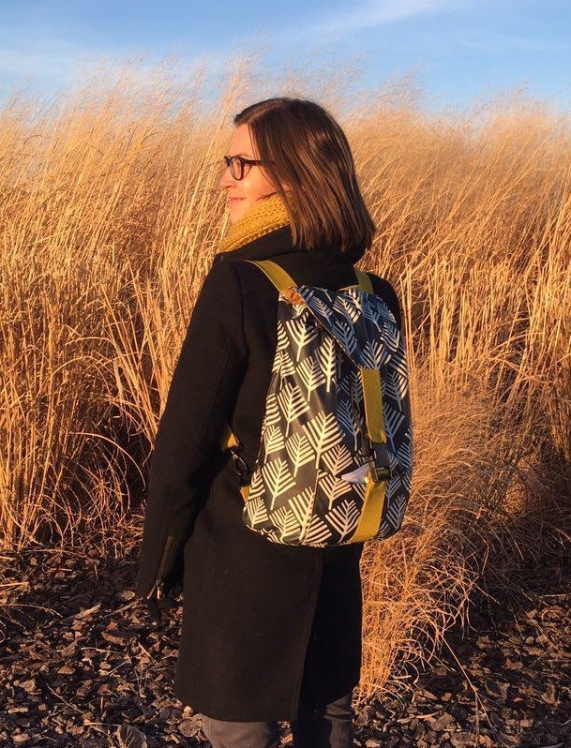